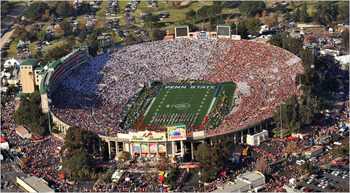 January 1st marks the start of another new year. As we set our New Year’s goals, envisioning the year to come, we relish in the fact that we can put those thoughts on the burner for a couple more hours, and enjoy the 99th Rose Bowl, the Granddaddy of all Bowl games! As in 2000, this year’s match-up will once again be the Wisconsin Badgers versus the Stanford Cardinal’s and it should prove to be a close and electrifying game. A little interesting back history of the Rose Bowl: it was established in 1902 and in 1916 became an annual tournament. For more than 60 years, the Rose Bowl has had the highest attendance in college football. This year they are expecting ticket sales to exceed 64,500. Since inception, USC, with 33 appearances, has played the most times, and with 24 wins, has won the most Rose Bowl Tournaments. The Rose Bowl stadium, built in 1922, is now a national landmark that has hosted 5 NFL Superbowls, men’s and women’s world cup tournaments, and countless concerts and events. The Bowl game is tied to “America’s New Year’s Celebration”, which also includes the historic Tournament of Roses Parade. So as you recover from your New Year’s Eve parties, grab your Mënaji Skincare’s 911 Eye Gel, a beer, and your remote; tune into the oldest and most prestigious college bowl game!

Made in the USA, MËNAJI is the first men’s product line to address the unique needs of men’s skin.

Recent Comments
Categories
Archives
InstagramInstagram did not return a 200.